What’s goin on with Blender Preferences? Why was need change preferences window?

+1 yes, also its more easy to read
and bring back hotspot for gizmos

What’s goin on with Blender Preferences? 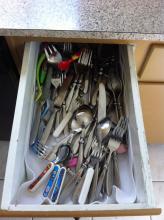 Everything was visible but no logical order or good grouping makes it slow and hard to find what you are looking for. The old Preferences used to feel like going down into a cellar or into the attic to find something in a random corner full of cobwebs. 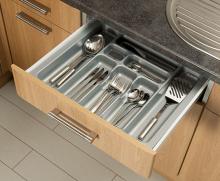 Are you tried to work with the new preferences window? When activate some options you need open addition options and just guessing where the option place. 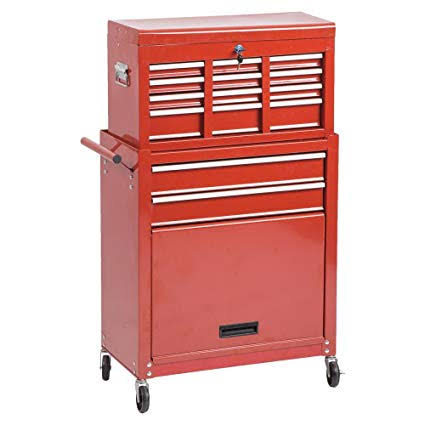 Clean and tidy at first look but rather tidious and sometimes impossible to find the tool.

I agree with @blender3dmaster. Maybe making all of the menus open by default would be better? But there’s just too many menus within menus; which is already a problem with the Properties panel.

Yes, the old style had everything thrown at you, but I got to learn what all of the settings were because I saw all of them all of the time. Now that settings are inside sub-menus, I’m going to have a much harder time remembering where something is.

Also, I know this is a first pass, but this is comical:

I think MODO does a pretty good job. It’s organized well on the left, and sections can be collapsed if you don’t need them. 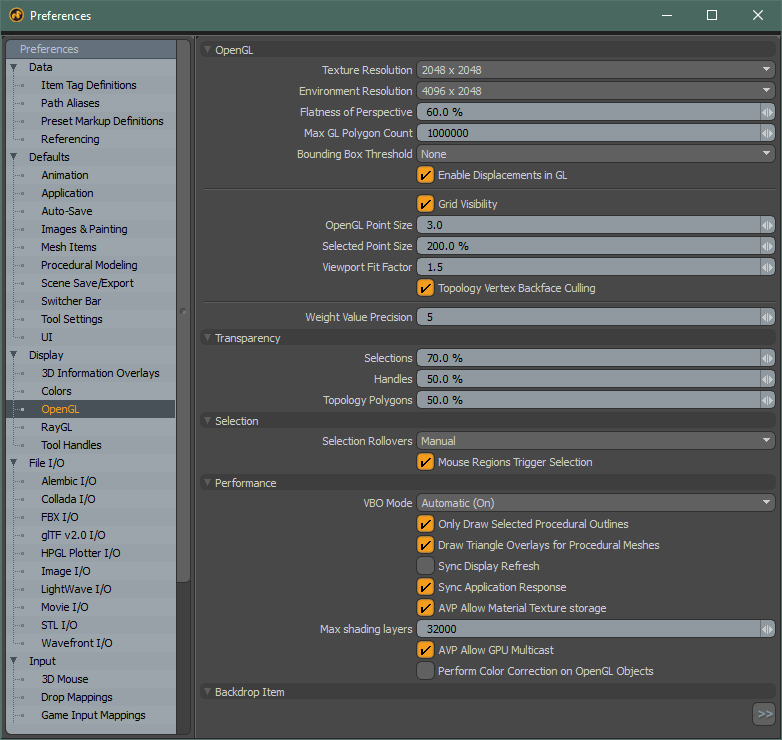 I did a quick mock-up. 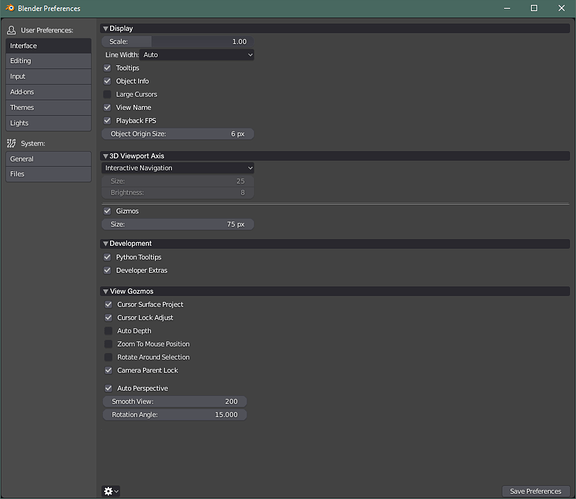 The problem with this analogy is that all of the silverware is still present to you immediately. To be more accurate you would need to stack certain pieces on top of others.

Out of sight, out of mind is the real killer.

Reminder of a couple panel features that can help a bit:

Drag across multiple headers to expand/collapse them all at the same time. So if you have it fully collapsed then you can drag from the bottom one to the top one to expand everything.

CTRL-click on a header to collapse all sections except the clicked one which will be opened if it is closed. Note that this doesn’t work right in nested panels as it ends up closing all the sections at the parent level which leaves the one you clicked on inside a closed section so you can’t see it.

I think we should enhance panels to have an “expand all” function in addition to the current “collapse all”. I implemented it privately using CTRL-ALT-click and it works well, but I don’t know if that would be a conventional/available key combination to use for that (CTRL-SHIFT is already consumed by another feature in panels). This would be useful in Properties panels as well.

I’d like to have a Preference to have the Preference sections entirely expanded by default, and I think this should be the default for new users who can turn it off once they learn where things are. This and having an “expand all” feature in panels or even buttons in the Preferences window would substantially improve “discoverability” where you just want to go see all the options that exist that you might not know about. Without these things the new changes are a step backwards in this area.

A lot of screen real-estate is consumed by the panel headers, reducing the signal to noise ratio.

The collapsible panels implementation in the Keymap section is different than the rest of it and has slightly different behavior than the other sections (I don’t really think this is worth worrying about though).

The old Preferences was a single level hierarchy where the new one is a three level maze of twisty little passages, and while I know Bill and company know exactly where everything is, I find it takes a lot of hunting to find things, especially now that a bunch of them were moved around to be in more logical locations, but sometimes the header text does not clearly suggest the contents (would you immediately look under Memory to find Undo settings?)

There has been discussion about having a search feature for Preferences (and Properties eventually) and I think this is sorely needed. If this is done I’d like to see the ability to define a string of text internally for each option that gets searched as well as the name so that you could have aliases/synonyms and thus to anticipate what users may type when looking for a feature that they don’t know the name of.

Currently the expansion state of the various Preference panels is not persistent in the settings / startup as far as I know. If it were you could save your preferred and most used panels in an open state. As it is now if you want to try a setting in multiple ways, you end up having to drill down into it every time you want to change it.

Doing a render with an open Preferences window will hijack that window and turn it into a Render Output window if there isn’t one already. So again you have to go back to Preferences and drill down again after a render if you’re playing with settings.

If you have more than one Preferences window open they are synced to the same section so you can’t have a different section open in each one.

The new layout does work nicely if you open it in place of say the default Properties location when working on Theme colors as the new layout functions in a narrow single column if needed.

Another advantage is that there’s unlimited room now to display additional/optional information that there was no room for before. So for example in the System Preferences for CUDA device, it might be nice to show a message indicating that unsupported (old) CUDA devices were found since 2.80 bumped up the compute feature requirement and some users are going to be confused when their CUDA device no longer shows up.

I think it’s useful to see the before and after side by side. 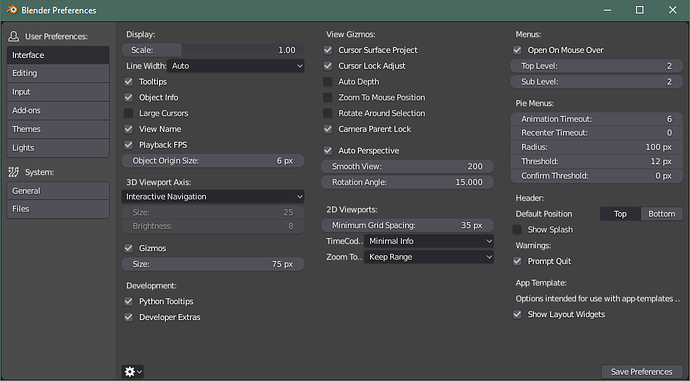 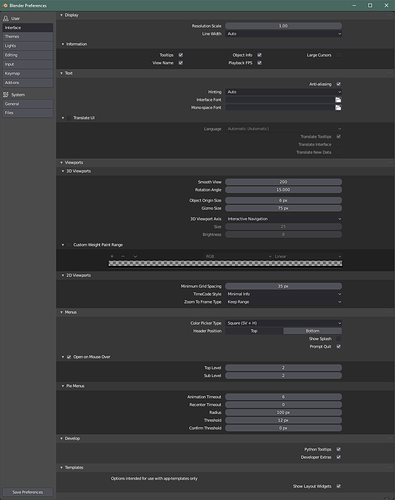 ???
is he kidding us?
I see a picture of a drawer with multiple horizontal and vertical columns of compartments …

The new preferences window is all a scroll of hidden options like the Chinese traps, or the Russian matriosks … made of a UNICA only long column extendable to infinity and beyond

Perhaps, left column need to split into more sections, such as a keyboard, a mouse. And in the right column show all options deployed? Previously, the settings were awkward, and now the main thing that you do is open up lists.

A search function through preferences would be nice, I don’t know how difficult to implement it is, but it would be definitely a nice feature.

Very nice work for the new preferences panel, now it’s CLEAN and sorted
And it nice to not have “:” everywhere anymore

it might look organized but it’s heck confusing ,and you’ll have to click and click and dig deep to find the right setting…the one column layout is not helpful either it should be multi-column u don’t want user wasting time in the preferences just to change one setting that he/she might not know it’s place.

You just are lost because this is new to you.
As soon you’ll be familiar with the new organized version, you will feel at home again.

Also, the implementation of a textfield search parameter would be amazing for accessing a setting super fast.

@mfx Are you serious? Can’t you really see the trouble this new design brought.

no, i have been using it for days since it was comitted and already faced the problems especially the menus and sub-menus are always closed even if you save the settings…etc u’ll keep scrolling and scrolling for one option, the horizontal space is much easier to work with than vertical one, u might like that but others don’t, it’s a waste of time.

This is serious issue.