Question. Is it possible to change a Graphics Node type?

For instance, in the newest build of 3.3, the metallic_sep (separater) node is changed from ‘image’ to ‘color’ which ruins the model exports (for me) on exporting in glTF-2 with PBR exports and graphics designed in Substance Painter.

Is it possible… to change that handling from ‘color’ back to ‘image’ in Blender 3.3 Alpha? I am new to manually editing graphics Nodes. I do not even see where you find ‘metalllic_sep’ node in the Shift-A listing, only that I have in the past used this for a long time now, and in 3.3 its changed and ruins the materials on export. Is there a way, possibly to change/modify a Node? Can you go into some sort of Node Editor system and change that?

I had to ask. I want badly to build my scenes in 3.3 and right now, this is preventing it. 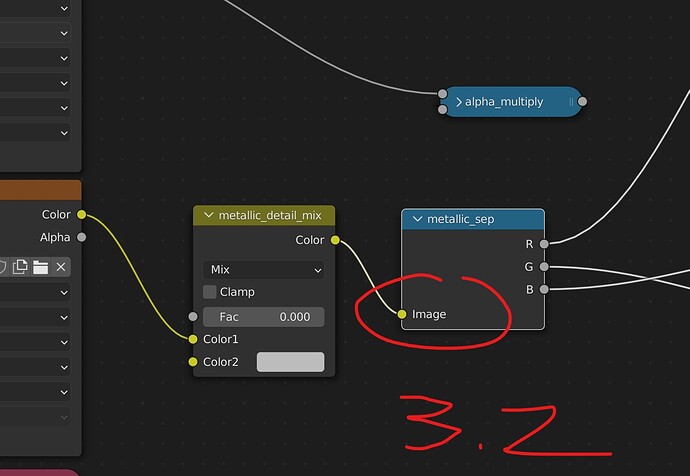 And it has always accepted a RGB input (yellow dot). Thing here is that more often than not, placing nodes in between the image texture and the corresponding shader node will obfuscate the image to the exporter. Dunno if the gltf exporter has some kind of setup here that allowed certain exceptions. If that’s the case, the exporter addon will need to be updated.

But again, there has never been an image input. Has always been either rgb, float or vector.

The way I see it, it was a misnaming having “Image” there when it had always been a color input. You’ll have to contact the addon exporter dev to make sure he reflects this change.

In Blender 3.1 and 3.2, that node always had ‘image’ as its input in ‘metallic_sep’ node, and in Blender 3.3, it changed to ‘color’ and also changed to a red colored node, if that means anything. Again, I know nothing about nodes in graphics and materials. My thing is polygons and painting them, mapping them. I seem to be alone right now as I am like the only one wanting to run in Blender 3.3.

My thoughts were, in posting this, is to see if there is a way to possible change ‘color’ in 3.3 ‘metallic_sep’ back to ‘image’ as its input. Is that possible? Is there a way to customize a node?

This is the new Blender 3.3 metallic_sep node; 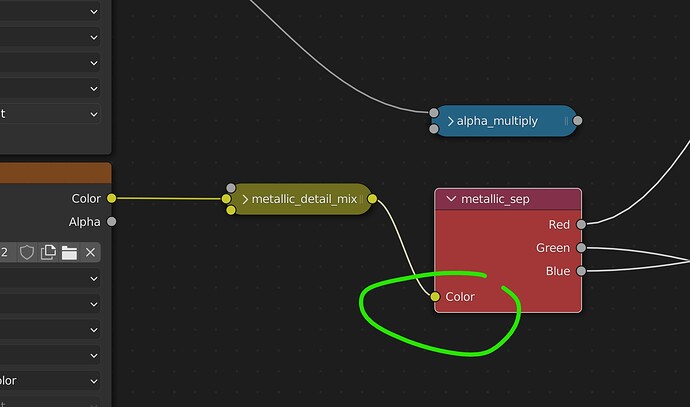 Oddly, the metallic_sep in earlier builds, in 3.3, is a blue node. It recently changed.

So tonight, just to experiment, I went in with a new scene, made a sphere, created that material, used those textures, and ‘Image’ was the link in the ‘metallic_sep’ node. 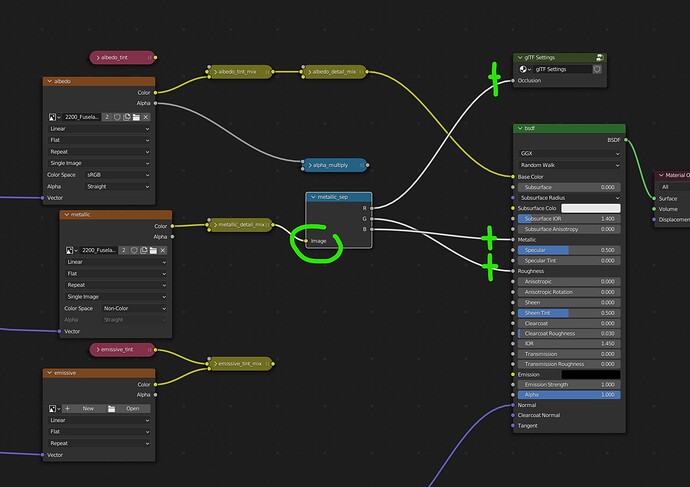 Note in the ‘fresh new scene’ that the metallic_sep is blue again also. odd…

Most probably this thread will be closed because this does not belong to “User feedback”, since you don’t know what’s going under the hood you make wrong assumptions.

First, I don’t know how do you create those materials, but again, It’s totally and perfectly clear that “metallic_sep” node is simply a “Separate RGB Node”. Looks like that in 3.3 was changed to “Separate color” and removed the relatively useless “Separate HSV” and integrated it all in a single node.

These are UI changes to cleanup a bit the nodes, doesn’t make sense to have almost duplicated nodes when you can have just one. Since you work with GLTF I think you may be using an addon that handles the node creation for you (I know that’s a thing with some games like Flight Simulator), and that it automated using the “Separate RGB” node and now, for 3.3, cannot find it.

Is not like they changed “Image” for “Color” (perfectly logical, the input has always been color, not “an image”), is that they erased a node and created a new one. The addon will have to account for this change when they update it for 3.3. 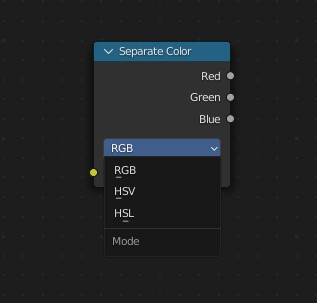 You are awesome. A thousand thanks for that. Massively appreciated.

In Blender, the Addon has ‘Material Templates’ with presets, like you see in the Nodes layout. Normal, glass, invisible, etc.

Many thanks again for your help.

I hope to get this running right in 3.3. I have a huge enthusiasm and interest in Blender. So many people could be using this instead of Max. Blender is far more powerful, fast, clean, non-buggy. The newest Max is so buggy, I walked away from it. 2014 was so good. 2020 was horrible. I am so glad I took the time to learn Blender.

So it seems, the node was modified in Blender 3.3 and will stay this way.

I cannot see a way to create a COMP map that will properly export with Blender 3.3, so I must walk away from Blender 3.3, sadly. I was hoping to get this working. Thats the way it goes. At least 3.1 and 3.2 is running things fine.

Thanks everyone for your input on this node.

Just saying, unless you’re helping betatest, or learning the new features, I’d stay away of the experimental builds.

Official build right now is 3.1, stick with that one for now. If the addon you use is being actively developed, they’ll fix whatever’s needed to fix when 3.2 is released. Problem is that it’s too early to fix any 3.3 stuff because that’s in alpha status and things may change.