How to: Build and debug Blender with VSCode on Windows

Hi there! I want to share with you my progress on building and debugging Blender with VSCode on Windows, which is officially unsupported.
Hopefully, more experienced developers could drop some hints here and there on how to further streamline the approach.
I went with VSCode, because I didn’t want to install yet another IDE (Visual Studio Community) and I like the Visual Studio Code Editor and its available extensions, as well as the cross-platform availability.

I assume you know how to install software, how to use the command line, and you know the VSCode interface.

First off, here are some guides which I more or less followed:

Since I wanted to sync my changes to an online repository of Blender, I decided to fork Blender from its GitHub mirror.

If you want to use the CMake tools extension debug button in the status bar for convenience, you also have to change the extension setting to include the arguments for the script folder. Add to your workspace settings.json:

Now we need to make Blender ready for debugging Python.

You should now be able to debug the C/C++ and Python portions of the Blender source from within VSCode.
Please let me know if this guide worked for you.

I did not get a rebuild.cmd, nor a compile_commands.json after building. Any suggestions?

What I haven’t tested:

Now what I would really need to get working is to debug the Python source code of Blender in VSCode.
I tried installing GitHub - AlansCodeLog/blender-debugger-for-vscode: Blender addon for remote debugging Blender with VS Code (and Visual Studio) to Blender and added a configuration to the VSCode launch.json, but it didn’t work.

I’d also need a task to copy the modified Python scripts in the cloned repo to the build folder for live editing.
Any other ideas on how to debug the Python source parallel to the C/C++ code base?

Last i checked mixed mode python/native debugging was not available in vs code (but i admit last i checked was about a year ago) and only supported in the regular visual studio.

It is possible to debug C/C++ and Python at the same time with vscode, I’ve done it in the past, at least on Linux. It looks like you are fairly close.
Have you verified that ptvsd is running in Blender before you try to attach to it on the correct port?
I’ve also installed ptvsd in the Python version that ships with Blender instead of creating a new environment.

Personally, I’m not using the cmake extension for vscode currently, so I can’t comment on that part.

quick google dug up this which works by attaching 2 debuggers at the same time which is not entirely the same as what they offer in regular VS where you can debug seamlessly from python to C/C++ and back in a single debugger. Check out the callstack on the lower right: 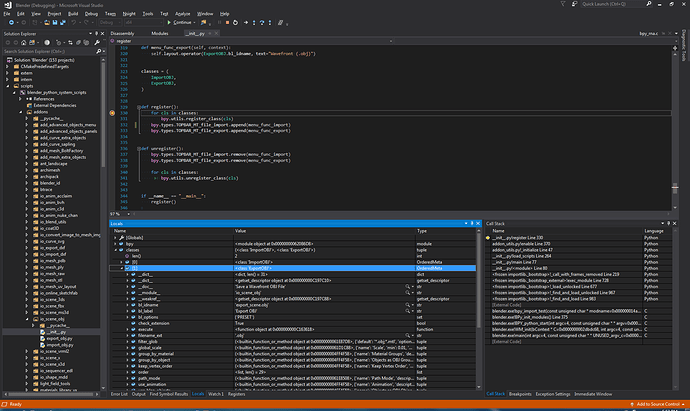 on the downside, using it absolutely devastates the blender startup time, so while useful it’ll never be your default goto solution. Priceless when you need it though…

Thank you both, @LazyDodo and @jacqueslucke for your replies! I just went at it again and got it working. The guide above has been updated. I was close and basically I just used the wrong substitute variable in my launch.json. I tried both, the path to ptvsd installed in the Blender, and the one in my environment. Both seemed to work now.
What’s left to do is to create a task that copies the modified Python source scripts from the repo to the build folder and reloads them in Blender, so I can immediately see the changes.

if you can live without cycles, you can just start blender with --env-system-scripts parameter and point it to the source folder, so you can skip the copy all together

With add-ons development, you can just reload the add-on in Blender after modifications in order for them to take effect. I thought the “Live edit” feature in Blender’s text editor could to something similar with built-in scripts, but I had no such luck. I know picking up changes is even tricky in a regular Python REPL after having already imported a module. If anybody can think of a way to reload the built-in scripts without having to close Blender, please let me know!

I also hope this discussion will solve the Python auto-completion with bpy.

The point is I´m prety sure that I have Visual Studio 2019 Community Edition installed whit Desktop development with C++ workload added and by default location on my pc.

May you give me a little help??
Thanks!

the ‘b’ in 2019b implies you want to use the VS build tools, if you only have the VS community edition installed it’s not gonna find them.

try without the b

It works without b… keep it simple… jajaj… Thaks you so much!

about this it doesn’t work anymore it has to be: