I also just noticed that everyone who reported at least limited success uses an RDNA2 card, while Luciddream and I both have crashes and we both use 5700XTs.

I’m pretty sure my 6800xt is running at 2560mhz core frequency and 2120mhz memory，I looked up the online benchmarks, 6800xt in 3.0 is 63s, my 3.1.2 is 97s, it seems to have become slower (wait for the time to re-download the standard project) but compared to 40s linux system still has nearly 50 percent performance improvement.Of course I don’t know how many iterations were used for the review rendering 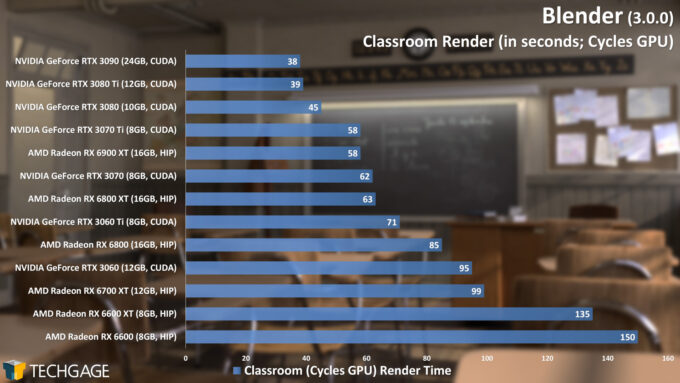 I think the review may have used a much smaller number of iterations I remember 2.93 was 150. I used 3.2 alpha rendering once and it took 2 minutes, slower than 3.1.2

Do you know how your Blender benchmark “score” as opposed to classroom render time. You should get a 2000+ “score” for a 6800XT on Windows, Linux or Mac.

Changed a 21.q4 driver 36s on the rendering is complete, it really is a driver problem.

I’d like to try the distribution of linux that you are using，Only OS - 5.17.1-arch1-1 I do not know which system is used

I am using Arch Linux, I think its fairly popular, however… Hi there. Are the summary of users having issues based on 5X00 series cards? ⚓ T97591 Address boundary error rendering with HIP on Linux, maybe RDNA1 specific
This issue from @wsippel ? 6X00 seems ok?

Just to recap you need the ROCM 5.1 driver or the upcoming closed source driver based off it and the latest blender build.

My 6800 works on Linux ok as per my post above, however I am not using a configuration that AMD supports.

After a bit of use only issues have been:

To clarify, when you say “driver”, are you referring to the kernel driver itself? If so, I’m pretty sure neither ROCm package on Arch installs the closed source kernel driver. There is a package for the DKMS driver (amdgpu-pro-installer), but I’d prefer not to mess with that if at all avoidable, so it would be very much appreciated if you could specify.

I also just tested again, with ROCm 5.1.1, the latest Blender nightly, and kernel 5.17.5 (which admittedly had no amdkfd fixes over 5.17.4 IIRC), still crashes in hipTexObjectCreate.

@bsavery just wondering if there has been any movement on HIP-RT for cycles… totally understand if there is nothing you can talk about right now!

Linux Testers. TLDR: Latest Blender 3.2 nightly builds should work with ROCM 5.1 driver now. Long story: There was a simultaneous change on the blender side that affected something in our compiler. We’re working to get that fixed and hoping to get Vega cards working for 3.3 On the HIP RT (hardware ray tracing) side, as readers of this thread saw we released the library, look for more info and definite date of this integrated to Blender in June / July.

I remember vega no rt, rdna2 began to have rt

How to forcibly turn on hip support for GPUs that are not in the list support range, such as radeon rx680m of rdna2 mobile platform? Is there anything like Environment variables such as CYCLES_ HIP_ SPLIT_ KERNEL_ TEST=1?

The main way of using AMD GPUs that are supported by the Cycles HIP implementation (E.G RDNA2 Mobile) but not supported with the pre-compiled kernels found in the release build of Blender is to compile Blender from the source code yourself with that specific device enabled.
You can find a guide on how to build Blender here: Building Blender - Blender Developer Wiki

Sadly, at the moment there are no documentation I can find that details how to configure the Blender build with the HIP SDK. So you may need to seek advice from others or figure it out yourself.

I’m currently on blender 3.1 and I noticed that rendering on my RX 6700 XT GPU was extremely slow. It was something like 5 or 6 times slower than expected based on benchmarks on the internet. I tried turning off SAM (smart access memory/resizable BAR) and it seems to have resolved the issue.

I’m not sure what other information to include so here are my observed rendering times:
To test, I rendered ‘Classroom’ at 150 samples 4 times using different device settings.

Sorry if the information provided is insufficient or pedantic I just never know what to include.
I may also note that in other applications SAM doesn’t have this big of an effect on performance on my specific hardware. Usually, the difference is within a few percentage points, if that, from what I’ve seen.