Blender - Organizer ( organization of the projects )

I’m a developer of Blender - Organizer. I know It’s not the most clever name. But it sounds exactly what it does.

So little story. I was 18 or something. And was trying to blow everybody away with the greatest film ever done only by me. And as all dreamers you go through a realization that it’s going to take time or you are not going to be able to make it.

And the hardest part wasn’t even the modeling / animating part. But keeping track of everything. Knowing what I’m doing when. And also figuring out how much I’ve done.

So after trying printing papers and using Libre Office Calc for a long time. I figured out that I need a better solution. Something that will make way more sense.

I knew a bit of python from BGE because every kid loves to make a game. And learning to use something like GTK wasn’t too hard. Because they have a very nice documentation where I can grab an element I need and after 15 minutes of figuring it out I can use it.

Movie came out 1 month before deadline. It wasn’t the best. My animation is still not the best. And I used terrible amount of early denoiser. If you are interested. It’s called “I’m Not Even Human”

Then came my next little movie project. And I knew I need to redesign the hell out of the Blender-Organizer. Write as much of it as custom UI so I could have more flexibility. 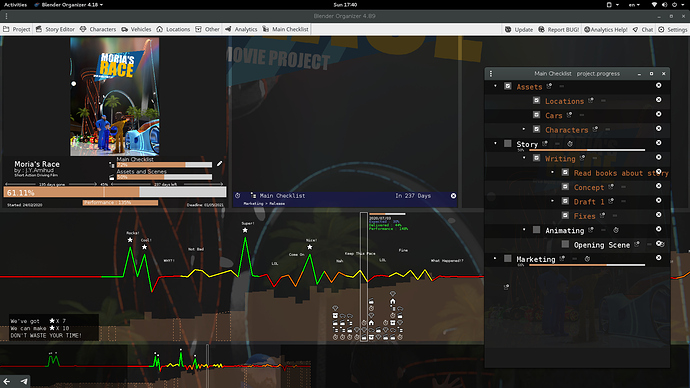 Now We have a cool colorful, gamified analytics with calculable, collapsible checklists. 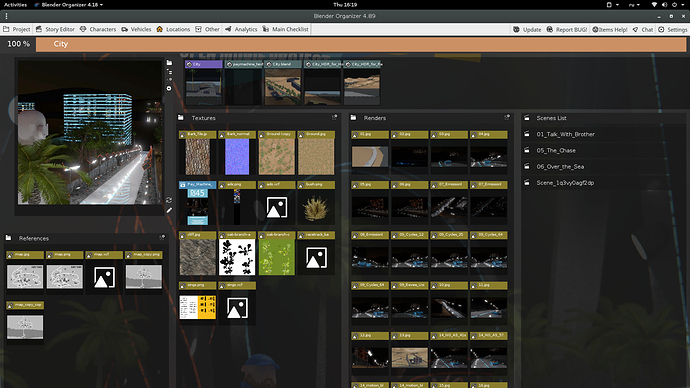 Asset manager. With blend file generator, list of scenes a given asset is in. And so on. 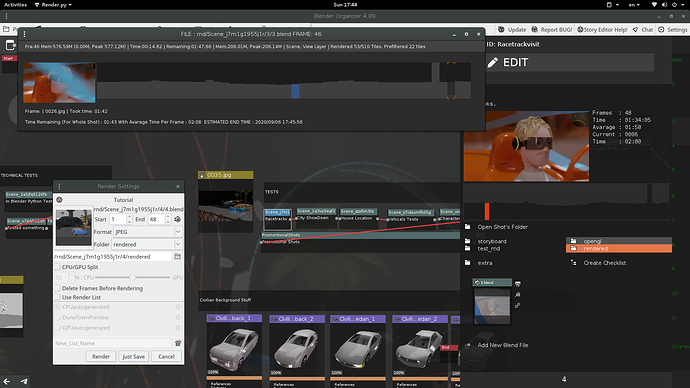 And a crazy powerful Node Based STORY EDITOR. That let’s you mark assets and shots right into the script. Generates shots folders. Have automatic linking of assets into the blendfiles. And has crash-proof renderer that records render times for analytics.

Now At the moment I’m not working on it. And the reason is the stupidest one. I just have no idea what to work on. Anybody can help me?

Taking a quick look at the github page…

That’s the first thing to work on!

I’ll be sure to look at it in further detail, too. It looks really neat!

I know lol. But I’m currently during a movie project and I don’t want to break the organizer. And also. With the current implementation of the update I’m not sure I can make a smooth transition for all the users. It’s a logistical nightmare.

Currently the scripts sits somewhere in the HOME folder. And you have all the .py files in it. On update it gets update.data file from github and reads what files should be changed. Then downloads only those files. And restarts.

Now most user probably pin the organizer like this

which is recording a given python version into a dot desktop file. It’s not that hard to find. But most people do not know about it. And so it will return tons of mistakes since I move to python 3.

Maybe instead I can have a working copy of python 2 somewhere in the files. Making the installation a peace of cake.

This is crazy hard problem.

EDIT: I was a little stupid kid when I started it. I had no idea that python 2 will be no longer supported. So never designed a thing that will make it so I could change a language on fly.

Possible solution will be make an update that will make those kinds of changes possible. And make it early. But there are 2 problems with it.

Wait. I can change the whole code of the main file. To just be a starter of python 3 version
something like

And add a .sh file or something to clarify the thing. It might work. But then I will probably need to rewrite a huge part of GTK stuff. Because it changed as well. And I’m scared because of the amount of GTK code in the blender organizer.

If it was my project, I would just push an update to disable the update system and tell users to manually upgrade to the new version, and then break compatibility.

How many people do you have using this? I imagine they’re all pretty well versed in software. I think they’ll adapt

Interesting point. Still until the movie is finished. There is no way I’m doing such a huge move.

Well done, it looks like a really handy tool.